Accedi a GestaltPedia
Made in Istituto

Ed began his professional life as a professor in the graduate Department of Counseling and School Psychology which developed into the Department of Marriage and Family Therapy. There he eventually became the department chairperson and director of the Gestalt Therapy Training program. He has taught both Gestalt Theory and Practice courses along with Structural Family Therapy courses and was a clinical supervisor for both specialties.Ed trained with the major theorists in Gestalt, Family Therapy and Family Constellations. Included in these are Irv and Miriam Polster, Laura Perls, and Isadore From the Gestalt field; Bert Hellinger, Hunter Beaumont, Albrecht Mahr, Jacob and Sigliende Schneider, and Stephen Hausner from Family Constellations; and Salvador Minuchin, Virginia Satir, and Carl Whitaker from the Family Therapy field.

He is coauthor of The Principles and Practices of Structural Family Therapy written with his wife Barbara. In addition, he is co-editor of Messengers of Healing, and has chapters in several books and articles translated into French, Spanish, Russian, and German. In addition, Ed has facilitated workshops and presented at conferences nationally and internationally in France, Belgium, Italy, Spain, Russia, the Ukraine, and Australia.

Ed is the director of The North American Systemic Constellation Intensive, and is on the faculty of the first Australasian Intensive in Sydney, and is a founding member of ISCA. Ed, in partnership with Dan Booth Cohen, is the organizer of this Intensive and has produced five North American Intensives. He often brings major international trainers to the US as well as offering his own trainings. His professional life consists of university teaching, a Systemic Constellation training program, workshop facilitator, and therapist in private practice.

I progetti in corso 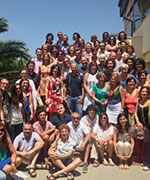